Interest in the determinants of health has increased in recent years.This is shown by the fact that countries have begun to base their health reporting on determinants of health instead of health risks.The work of the Commission Social Determinants of Health (CSDH), created in 2005 by the WHO and led by Michael Marmot has provoked global interest. The mission of this group was to find evidence for ways of reducing health inequality and to show how progress in this regard could be achieved worldwide. The group's final report with the title "Closing the gap in a generation. Health Equity through action on the social determinants of health " was published in 2008.

The reason for the increasing focus on the Social Determinants of Health is the fact that they are seen as an adequate response to the changing living and working conditions at the beginning of the 21st century, which have in turn led to an increase of chronic and mental illnesses related to globalization and individualization. 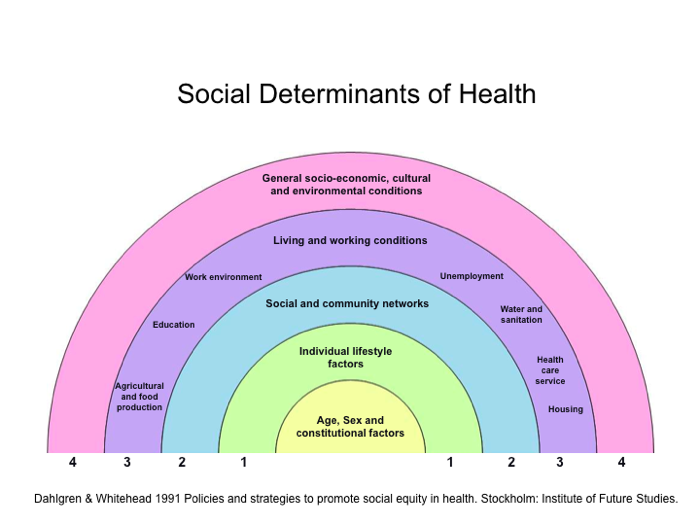 Important determinants include income and social status, social support, social networks, education, social life, environment, gender and cultural environment. Still largely missing are explanations on how various factors interact and which chains of effects are crucial under which contextual conditions.

In practice the focus on determinants of health means that rethinking is increasingly required. The current emphasis on individual behaviour must be directed towards structural prevention, taking account of health inequalities. The inclusion of the socio-cultural context in interventions is given a more central role.This requires that fundamental elements such as health reports are consistently based on the determinants of health. This not only provides the necessary foundation for implementation but through evaluations conclusions may be drawn as to the effectiveness of the interventions. The complex connections between life conditions and behaviour pose a particular challenge for research. Finally, policy decisions are required for the development of the social framework. Not only the health sector, but all sectors are involved when it comes to influencing the social determinants of health in a positive way. Procedures for a multi-sectoral collaboration are to be developped and it is important to implement consistently a 'Health in All' policy.

Why you would disregard these aspects

What you have to gain

What you can actually do